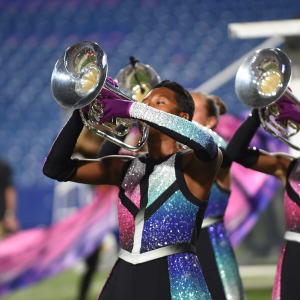 Sena Narottama was born and raised in Pekanbaru, Indonesia. His love for marching arts started when he was nine years old where he became the youngest member of Bahana Cendana Kartika Marching band in 2004.

Sena began his drum corps career with Blue Devils B in 2012 through 2014, winning his first Open Class championship in his third season. He then moved to the United States to join the Blue Devils A corps from 2015 through 2017, ending his career with two DCI World Champion titles.

Back in Indonesia, Sena works as a marching band clinician, visual consultant, and adjudicator. He worked with the Department of Education band and taught various college marching bands including Bandung Institute of Technology, University of National Development “Veteran”, and the Islamic University of Indonesia. He also works as a Studio Assistant, producing new media advertising at WaiWai post-production studio with his older brother in Yogyakarta.