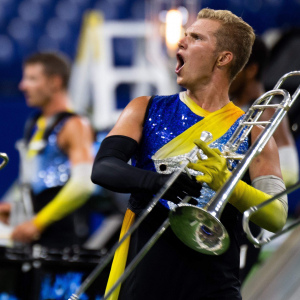 My name is Matthew Schwartz and I’m originally from Pflugerville, Texas(North Austin) currently pursuing a Masters of Architecture degree at the University of Kansas MArch program in Lawrence, Kansas.
My primary instrument is Bass Trombone, and drum corps has given me the ability to play euphonium and tuba. My hobbies include sketching/drafting/technical drawing, designing exterior and interior spaces, running/cycling/weight lifting, playing trombone, camping, and drum corps.
I began my corps experience in 2014 at the Crossmen as a euphonium player, and continued there during the 2015 season. My third marching season(2016) was spend at the Cadets, again as a euphonium player. My final four seasons(2017-2021) have been spent at the Blue Devils as a euphonium and trombone player. My seven years of drum corps have instilled a variety of character, music/movement, and creative development that have served me well and prepared me for my future professional endeavors and continual personal development. I am beyond excited to cap off my final year at the Blue Devils, do it up!
See photos of Matthew
2021
2020
2019
2018
2017