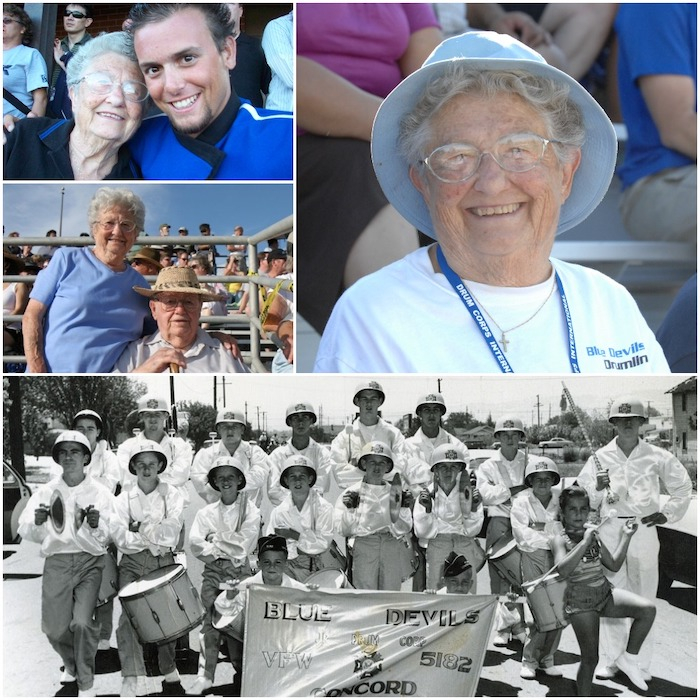 Please join us in celebrating the life of Ann Odello, who passed away this week at the age of 93. Ann Odello co-founded the Blue Devils alongside her beloved husband Tony Odello, setting in motion an organization that would not only encompass three generations of Odellos, but impact thousands of lives across the world for over eight decades.

Ann Odello was born and raised in San Ramon, California, the youngest of 8 brothers and sisters. Shortly after World War II she met Tony Odello, just returned from service in General Patton’s army on the European front. They wed in 1948 and remained married until Tony’s passing in 2009, an amazing 61-year marriage.

Ann and Tony’s marriage brought the births of daughter Annette, sons Rick and Tony Jr, and really, the birth of the Blue Devils. Daughter Annette wanted to twirl baton, and as Ann and Tony were active in the local VFW that was sponsoring Concord area twirling groups, they took that connection and in late 1957 held a meeting in their living room with 24 interested youngsters and parents and created the Blue Devils.

In 1958 the Blue Devils added a drum and bell corps that along with the twirling group would win nearly every contest and parade entered. 1961 saw the addition of a color guard, 1970 the addition of bugles, 1972 their first out-of-state tour and by 1976 won the first of 19 Drum Corps International World Championships. Ann Odello was there each step of the way.

In an interview with the Contra Costa Times in 2009, Ann reminisced how they started the Blue Devils to give local youth a wholesome activity. “We used to save scrap metal and deliver to Oakland in the truck to raise money. It was just family and a few friends” she shared. “We were never home on weekends! I mean, period. My house was always dirty, and I never had time to do the dishes. Beds were never made. I didn’t have time to do that. But it was worth it.” The Odello home was open to all at all times, their swimming pool was constantly packed with Blue Devil members and they became second parents to many, often taking a group camping with them on a rare weekend off.

Ann Odello’s family has remained deeply invested in the Blue Devils. Annette has led the Blue Devil C corps color guard for decades while co-founding and leading the Blue Devils Special Needs Guard. Her influence on the Blue Devil’s legacy of excellence in twirling, color guard and education cannot be over-stated. Son Tony Jr was a key part of the development of the Blue Devil drum line’s dominance in the late 1960’s and 1970’s and son Rick was a critical part of the Blue Devils competitive successes and meteoric rise in the 1970’s as a member, instructor and designer, and was inducted into the DCI Hall of Fame in 2008. Rick then went on to lead and re-energize the B corps for 14 years starting in 2004, an era that saw them win five DCI Open Class Championships, at the same time leading the beloved and important Blue Devil C corps from 2001 to his retirement just this year, introducing thousands of young children to music, performance, and the Blue Devils.

“Mom was one of a kind and as tough as they come” says son Rick. “She would never hesitate to tell it like it is but would always be there for love and support”.

Ann Odello’s legacy goes beyond her three children, as daughter-in-law Debbie (Milina) joined the Blue Devils in 1969, taught the A, B and C corps for years, was at her husband Rick’s side managing the B and C corps throughout the 2000’s and worked full-time in the corps office in a multitude of capacities until her retirement in 2020. Grandsons Ryan, Adam, Ricky and Andrew were members of the Blue Devil A, B and C corps (and each won a DCI Championship during their time in the A corps!), were deeply active as instructors for the B and C corps, and to this day still perform and help manage the organization’s BDEntertainment ensembles. There are 7 great-grandchildren and few doubt that they too will someday become a part of the Blue Devils, carrying on the love of the organization that Ann Odello embodied.

“My Nonna loved completely, spoke strongly, and lived independently” says grandson Ryan Odello. “She was a force of nature without ever trying to be. I will forever miss her care and confidence.”

For the Blue Devils that knew and loved Ann Odello, the thousands who did not have the pleasure of knowing her but have been able to be a part of the Blue Devils, the countless fans worldwide who have found joy in watching a Blue Devil group perform, Ann Odello will indeed be missed, but her life’s work will not be forgotten.

Services for Ann Odello will be held Tuesday, February 8 at the Diablo Valley Funeral Home in Concord, with a viewing from 4 pm to 7 pm and a rosary service at 7 pm. The funeral services will be held on Wednesday February 9 at Valley Funeral Home at 11:30 am with burial at 1:30 pm at Queen of Heaven Cemetery in Lafayette. A reception will follow at Zio Fradeo’s Event Center in Pleasant Hill.