Celebrating the Life of Eldon Conklin 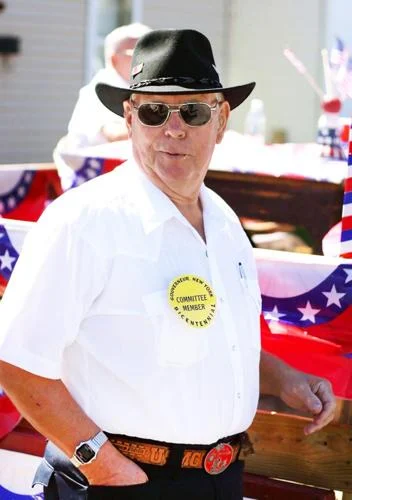 Please join us in celebrating the life of Eldon Conklin, beloved member of the Blue Devils touring team and friend to all. Eldon passed away May 6 in his home in Gouveneur, New York at the age of 93.
In 1989 Eldon found his way to the Blue Devils, and as an experienced truck driver took the wheel of Devils Food and stayed on for the next 18 years. “His main responsibility was driving Devils Food” says longtime corps manager Pete Emmons, “but that was only the beginning. He was not only a superlative driver and cook, but a more than capable mechanic, a confidant and a valued friend.”
Eldon called upstate New York his home his entire life. A truck driver since he was 18 years old, he served in the US Marines in the 1950’s and then returned to Gouverneur, New York and immersed himself in his community. Over his lifetime he owned businesses ranging from a furniture store, to a theater, a bowling alley and an antique shop, all while continuing to drive truck, hauling everything from milk to lumber to horses.
Most notably, Eldon became deeply involved in local politics and governance, serving as a village trustee, town councilman and even Mayor for several terms. He was a 25-year member of his local Chamber of Commerce and was instrumental in creating the Gouverneur Community Center.
Dave Gibbs remembers Eldon fondly. “Eldon came to the corps just as I took on the role of Executive Director and he quickly became someone I respected and admired deeply. His reliable, steady hand and unwavering dedication made all the difference. Eldon embodied the best of what the Blue Devils stand for”.
For nearly two decades Sandy Gist worked side-by-side with Eldon on Devils Food and sums up who Eldon was to the Blue Devils: “Driver, cook, navigator, friend, funny, Mayor and all-around special man.”
Dave Gibbs goes on to share that “Eldon did this for all the right reasons. He loved the Blue Devils and the kids. He really did love the kids”.
Eldon was married to his wife Eloise for 50 years, raised two sons and had 5 grandchildren and several great-grandchildren. Funeral services will be held Sunday, May 15 in Gouverneur, New York.
Arrangements are with Green Funeral Home, Gouverneur. Pep Manning, longtime fellow Blue Devil driver, will be attending the service as a representative of Blue Devils past and present.
“Eldon was a very private man and shared a quiet wisdom. He spoke only when he had something to say, so when he did speak……….you knew you should listen” remembers Pete Emmons. “I can’t think of anyone that was more caring, thoughtful and respectful of the Blue Devils organization and its members than Eldon Conklin”.