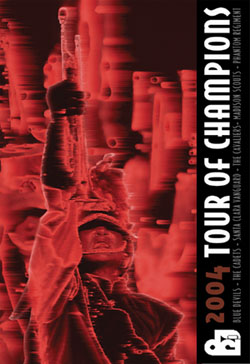 Ticket Special ONLY for BDPA donors
See Below

Make no mistake; this is not your run-of-the-mill drum corps tour! Produced in world-class facilities, each field event will feature all six corps? full competitive programs refined to their maximum potential, PLUS special encore presentations, unique massed-corps performances and a custom-crafted competitive system never before used by Drum Corps International!

All 2004 Amigo benefits to Precision West will be applied to the Tour of Champions. These include, BEST seats on the stadium, access to all events for the day, plus a BBQ dinner and premium seating at the Stanford University Stadium.

Details on tickets to the 2004 Tour of Champions will be made available soon. However, Amigo benefits will be available to current DONOR MEMBERS ONLY, at the $50 level and above.

To have an opportunity to have the best seats in the house and help The Blue Devils continue to their tradition of excellence, DONATE NOW and become donor member of The Blue Devils.

So don?t miss this opportunity of a lifetime to see the best that Drum Corps has to offer in 2004!