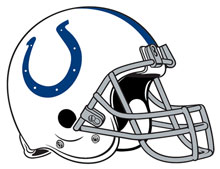 For most drum corps members the Sunday after the World Championship usually means packing up and heading home. But for this year's Blue Devils, Sunday offers one more chance to perform before tens of thousands of people.

"We are thrilled to announce that the Blue Devils will provide our Halftime entertainment for the August 12th Colts verses Rams preseason opener." states Ashley Powell, Marketing Coordinator for the NFL's Indianapolis Colts. "We are looking forward to a great performance to help us kick off another exciting Colts season!"

Performing selections from their 2012 production "Cabaret Voltaire", the Blue Devils are excited to bring the energy of drum corps to the festive atmosphere of an NFL game. No stranger to professional sporting events, Blue Devil's BD Entertainment program provides ensembles and drum lines for teams including the NBA's Golden State Warriors and the NFL's San Francisco 49ers.

Kick-off is at 1:30pm EDT, Sunday, August 12. The game will be broadcast on the NFL Network. Check out the Blue Devils' Mediabox for pictures and reports from Gameday!