It's taken several months to get customs clearances in order, but this week 46 brass instruments left the Port of Los Angeles on the way to South Africa, to be put in the hands of eager young band students. As well, a cash grant derived from the proceeds of the sale of "One Music One World" t-shirts has been sent to the Field Band Foundation's US office, to be used in whatever manner the Foundation feels would help best serve its mission. 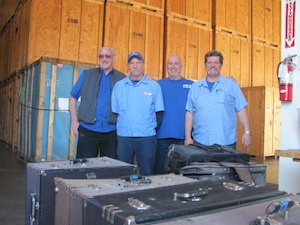 Employees from King Relocation in Santa Fe Springs, CA get set to crate the horns for delivery to the Port of LA docks

"We sold out of the first run of shirts before August, and have only a few left from the second printing." states Gail Shultz, promotions and development manager for the Blue Devils. "We're proud to see how our fans got behind the important work that the Field Band Foundation does."

A portion of the crating and shipping costs have been donated by King Relocation/United Van Lines of Santa Fe Springs, California, in support of the Blue Devils work with youth here and around the globe. "This is a beautiful project and we are glad to help" states Martin Delaney, Vice-President of Operations for King Relocation.

Two tubas were delivered this past October when several Blue Devil team members attended the Field Band Foundation Championships in Johannesburg. A remaining 6 tubas will be delivered next fall, just in time for the Foundation's 2013 Championship event. All totaled, 54 brass instruments are being put in the hands of students in South Africa. 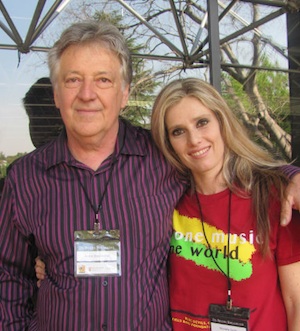 "The Blue Devils support is so very welcome and appreciated!" says Field Band Foundation CEO Retha Cilliers. "We can start a new band with this donation." Essentially launching bands each time they secure the necessary funding and instruments, the FBF currently has groups in 40 townships, with hopes to add more as support allows.

Blue Devils Executive Director Dave Gibbs says that supporting the Field Band Foundation is just one part of the organization's broader One Music One World initiative. "Along with supporting the FBF's great work in South Africa, we're working to provide support to youth music programs in communities as wide ranging as inner-city Los Angeles, Eastern Europe and South America."

To support the Blue Devils' One Music One World initiative and learn more about our growing international relationships, check out bluedevils.org/about/omow